From: Classrom Confidential - The 12 Secrets of Great Teachers

Great Teachers Don't Take No (or Yes) for an Answer

Teaching by Asking Instead of Telling

Kids don't have to be in the gifted club or even wide awake to answer most of the questions their teachers pose. In fact, the level of dialogue in some classrooms is so rudimentary that many bright kids have completely abandoned the notion of school as a cerebral experience. That's why in many classrooms you encounter the phenomenon of the DA—the Designated Answerer. Designated Answerers have a single purpose in school — to answer any question the teacher asks. They spend most of the day with their arms in an aerial position, waiting expectantly, cooperatively, even slavishly, to field the next volley.

What is the major export of Alaska?
Oil!

What do pandas eat?
Bamboo!

How many toes on your left foot?
Uh, five? (Seems like a trick question.)

Some classrooms have just one DA, tirelessly playing verbal ping-pong with the teacher from early morning through the closing bell. Other rooms are DA—rich. Three or even four contenders semaphore vigorously to catch the teacher's eye, or gasp as if being garroted to catch her ear. All for the honor of delivering the "right" answer, so the game can move on to the next round.

And where are the rest of the students? AWOL. Having a rich fantasy life. Working on a series of Baroque doodles, or drafting the great American novel, one clandestine note at a time. They're bored. Indifferent. Ripe for rebellion. Can you blame them? The teacher has made it clear that their presence is only required so that the body count matches the attendance sheet. Participation is strictly optional — maybe even unwelcome from students with inquisitive minds or an argumentative streak. And that's fine with them. School is simply a rehearsal for retirement, without the cane or walker.

The only thing that disturbs the metabolism of most students is when the Designated Answerer is absent or unexpectedly transfers to another school. Who's going to keep the teacher busy all day? The teacher may get a little nervous, too. Who is going to answer her questions? What will happen when she asks where Kenya is located, and no one volunteers "right on the equator" or leaps up and gestures toward the middle of the map? Luckily, teachers have a robust repertoire of emergency moves for situations just like this. Faced with stony silence, they repeat the question, "Who can find Kenya?" but louder, as if they've suddenly been transferred into a class for the hearing-impaired. If the silence persists, they're likely to bear down upon a hapless student and demand, "Adrianne, find Kenya!" or simply stab at the map with a yardstick, sputtering, "Right there! We talked about this last week."

Not a pretty picture. But it's pretty accurate. Too many schools and instructional programs that tout critical thinking seem to be fundamentally critical of thinking as a basic classroom activity. It takes a long time. It's messy. The outcomes are uncertain. And how do you assess something that has no right answer? The instructional day is so crowded with "experts," from textbooks and videos, to prescribed, scripted, time-driven curriculum that there's simply no place for students or teachers to say, "Wait a minute, I don't think I agree. Let's take a closer look at that."

What if teachers do want to dig in and try some rigorous thinking? Really probe kids to find out what they're wondering besides "Is it lunchtime yet?" They're not likely to get many takers. Any kid who's old enough to tie his shoes without assistance is too savvy to play that game because from the first day of kindergarten, we teach kids how to do school. The teacher asks a question. It has one answer. He already has that answer, but he wants to hear it from a kid. In return for the right answer, the respondent will get a smile or a saccharine "that's right" and the class will get another question to answer. That's how you do school, and woe unto the student who breaks the rules, gives the wrong answer, or worse, asks a question back! Questions posed by students frequently earn the curt reply, "We're not talking about that now."

This is a graveyard for thinkers.

So kids protect themselves by not volunteering unless they're certain of the answer. If you decide to change the rules by asking open-ended questions that seem more like an invitation to ruminate than simply recite, kids think it's a trick. Their response? Industrial-strength silence.

Here's the saddest part. That silence in your room is an echo of the silence in their heads. Their brains are gridlocked — intrigued by the notion of a question that really could have some interesting possibilities, and paralyzed by the skepticism that there's just one right answer after all, and they don't have it.

Socrates was one of the first educators to conclude that learning cannot be delivered. Like most great teachers, he believed that people learn best when they're involved, and the way Socrates got them involved was to ask a great question. He spent his life asking and asking, annoying almost everyone in town, until finally they quenched his thirst for knowledge with a cup of hemlock. Happily, teachers who use Socrates as a model rarely share his fate.

The way that Socrates taught is called the Socratic or inquiry method. The word inquiry tells it all. It's about motion-probing, eliciting, pressing for, searching, seeking, scrutinizing. Inquiry is an interactive, give-and-take-ish way to pursue learning with your students. It's the opposite of those monologues called the didactic approach, where the teacher delivers large shipments of information to students who are apparently "learning." In reality, many students simply gaze in the approximate direction of the speaker and silently refuse de- livery. Occasionally the teacher breaks the monotony by firing a low-level ques- tion over their heads — Who was the first president of the United States? How many inches in a yard? Which is bigger, a molecule or an atom? Who fought in the War of 1812? — more as a check for consciousness than comprehension. 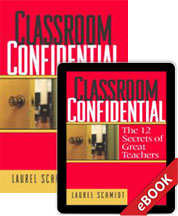 Brimming with practical instructional strategies, tips on classroom management, and hundreds of leads on teaching resources, all in a read-it-today-do-it-tomorrow format, Classroom Confidential dishes the goods on every aspect of successful teaching.